She and the Fourth Day 2

I wiped off my sweat.
Since then, we resumed working, and as a result of doing our best for nearly an hour, we gathered plenty of seeds in the jute bags we brought with us.
Cain tied up the jute bags and tossed them over his shoulders.

“Alright. Granny’s request is complete with this. I’ll hold them on the way back, but when we’re back in Wilhelm, you bring it to Granny.”
“Aah, I know that. It was a request to me.”

Freed nodded to Cain’s words.
Unsurprisingly, I was tired, so we talked about going back to the Royal Palace for the time being and went back the way we’d come.
I wanted to quickly return to the Royal Palace, drink something cold, and rest. Suddenly, I spotted a familiar face among the people on the beach.

Noticing that I came to a stop, Freed also stopped. I reflexively pointed at that person.

Cain was the first to react. He looked where I was pointing and grimaced.

He – Abel was buried in the sand with only his head sticking out.
Because I’d heard he was being pursued by Sahaja, I got an unpleasant premonition for an instant, but when he seemed to notice our gazes despite the considerable distance, he called out to us in a cheerful voice.

He was so carefree that it felt like a lie that he’d been an enemy until recently. Certainly, he had no such intentions now and if push comes to shove it might be necessary to make him our ally, but it was quite confusing to be so indifferently called by him.

We were so far that we could pretend not to notice, but since our eyes met perfectly, that wasn’t a choice.
With a bitter face, Freed said.

It couldn’t be helped, so we got down on the beach and walked up to Abel.
Without concealing his astonishment, Freed told Abel, who was buried in the sand.

Abel replied with a serious face to Freed’s question.

“Listen. Brats did it while I was napping. At first, I was wondering what they were trying to do, but they only buried my feet in sand, so I thought it’d be fine and ignored it. Then, when I woke up… Isn’t it strange? And that’s why I’m in this situation! And so, please help!”
“…”

I got a headache from Abel’s words that had no hint of crisis.
What the hell is he doing? I thought so before too, but he’s a truly mysterious man.

“… He reaps what he sowed, so how about we leave him?”

I unconsciously said that, but both Freed and Cain agreed.

I felt like I lost all strength, but in the end, I couldn’t leave him be.
When I asked Cain, he made a very annoyed face but still dug up Abel. 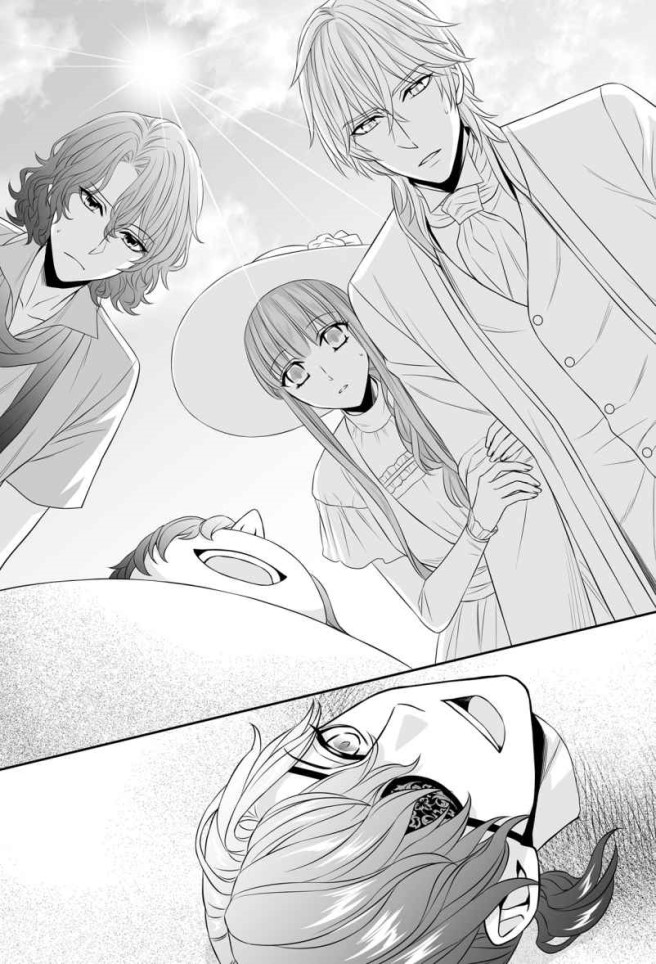 Abel sat cross-legged on the sand.
He breathed out tiredly and looked up at us.

“Oh, I’m saved. Wet sand is unexpectedly heavy. I thought it was a child’s play, so I ignored it, but I went through a hard time because of that.”
“… What were you doing?”
“Nn? I’m saying, I took a nap. A nap under the bright sun is a luxury, right? I’m enjoying my vacation! Or something!”

Certainly, it’s luxurious, and nobody would expect the capable information broker from Sahaja to sunbathe, so his pursuers surely wouldn’t notice either, but something felt off.
In the first place, what’s with vacation.

“You’re being pursued, aren’t you? Aren’t you too brazen despite that?”
“It’s the opposite. I don’t think they’ll notice, and probably they don’t even think I’ve come to Irvine, so isn’t a little vacation good? But, because I slept, I feel tingly all over.”
“Tingly, aren’t you sunburnt?”

“Well, fine. But, while I heard of you from Cain, I really didn’t expect to meet you in Irvine.”
“We might be surprisingly linked by fate. Taking the opportunity, please support the information broker Kaleidoscope by all means! Generally, depending on money, I’ll undertake everything but killing.”

Abel promoted himself with a grin. I vaguely observed him.
Cain said Abel was a member of the Hiyuma clan. The same clan as Cain’s. The same survivor of Sahaja’s massacre. I wonder what they think of each other after meeting, having walked different paths in life.

It’s not a question I, who doesn’t know anything, can ask recklessly.
I’m curious, but I won’t ask. When I thought so, Freed suddenly pulled me to himself.

Apparently, the limit of my husband’s patience had come. Noticing that, I honestly apologized. He knew I had no feelings for Abel, and yet he found even my interest unpleasant.

―― What a difficult person.

But, I don’t hate it all.
I gripped the sleeve of Freed’s clothes. When I looked up at him, he looked at me with a sulky face.

It’s my important duty as the wife to calm down my husband who has the strong desire to monopolize.
When I whispered him words of love, Freed’s face returned to the usual gentle one. Abel, who seemed to have witnessed our exchange, uttered, “Ugh,” in a displeased voice.

“What was that? Are you always like that in Wilhelm…?”
“Er… Mostly?”

“… Is that King trying to tear apart this couple that makes you feel like dying from sugar overdose? No matter how I look at it, it’s impossible…”
“Is the King you mentioned Maximilian?”

When Freed asked so in response to Abel’s muttering to himself, Abel nodded with a serious face.

“That’s right. He’s the main cause of my escape here. That King desires Mrs. Crown Princess by all means. I don’t know what he’s up to, but it seems he’s making various plans.”
“I’m sure.”

When Freed replied with displeasure, a man’s shout resounded from nearby.

The voice was at its wits’ end.
Hearing that voice, people around screamed.

“Kyaa! Disgusting!”
“Return it to the ocean quickly!”
“Devil?”

I observed the surroundings to see what was going on. A small boat arrived at the shore.
It seems the one to raise his voice was the man on that boat, probably a fisherman. The boat had a net and fish could be seen bouncing inside. The man was staring at the net with fear in his eyes.
Apparently, the man had caught something in the ocean. And everyone was frightened and called that something a devil with disgust.

I thought Freed might know, so I looked at him, but he shook his head.
While at it, I looked at Abel, but he shook his head cluelessly.
Come to think of it, there was nobody from Irvine with us. It was natural I’d get no answer.
I thought that there was no point in continuing like this, so I decided to directly ask the man who’d apparently caught that ‘devil’.
When I separated from Freed and tried to go to that man, my hand was caught.

I’d thought he’d come anyway, so I nodded. When I went up to the man together with Freed, he was fearfully trying to approach the net.

He seemed startled to be called from behind. The man had black hair and an impressive sunburnt, muscular body. He was probably over thirty. As he looked at me, his eyes went round.

“What? We don’t see many gals here. What do you want?”
“Er, I heard devil some time ago, so I became curious… Ah, I’m from Wilhelm, not Irvine, so I don’t understand why it was said.”

When I told him that I’m from Wilhelm, he nodded understandingly.

“Indeed, your skin is white. Is the lad next to you also from Wilhelm?”
“Er, yes.”

The existence of a person who’d call Freed ‘lad’ made me reflexively smile wryly, but I didn’t point it out. Freed too must’ve read the situation and said nothing.
At any rate, understanding that I and Freed didn’t know anything, the man pointed at the net with the word, “That.”

“Come see if you want. I make a living by fishing. Sometimes, a disgusting devil gets caught together with fish. They spit black ink, are slimy, and have eight arms with suckers on each. They look creepy. Everybody calls them ‘devils’. Some people say you get cursed if you don’t return them to the ocean quickly. Everybody around here knows that if a devil is caught, you return it to the ocean right away. That’s for the best.”
“… Eight arms with suckers…”

I’ve heard of those characteristics somewhere.

I shook off Freed’s hold and peeked inside the net. Sure enough, inside was a creature that I’d mostly expected.

Chapter 4 of the manga is out on mangadex!

View all posts by jingle

This site uses Akismet to reduce spam. Learn how your comment data is processed.