She and the Third Day 2

The pleasant tea party ended in no time.
Since then, everybody relaxed, and I was able to spend fun time with the Queen and Raid.
When I was parting with the Queen, she clasped my hands and with moist eyes told me, “Please, continue being friends with Ophelia. She’s a very good child, but she’s often discriminated because of her appearance.”
Of course, since I’d totally come to like Raid, I didn’t even consider refusing.
When I honestly expressed my feelings, “I hope we can get along even after I return to Wilhelm,” the Queen told me, “If there’s something I can do, please ask for anything,” with incredible delight. Afterwards, I was told, “If possible, I would like you to wear a dress of my choice as well. I could have it delivered to your room.” Unable to refuse, I had no choice but to answer, “Yes, with pleasure!” like a bar employee from my previous life.
Later, Raid asked me, “Should I refuse for you?” but the Queen was delighted that I’d wear her dress, so I couldn’t say that I didn’t want it.  When I said, “I’ll do it,” filled with determination to wear any dress that’s chosen for a whole day, Raid finished me off, “Esteemed Mother prefers frilly dresses, so prepare yourself.”
Well, it’ll be alright. The dress the Queen was wearing was certainly frilly, but her taste wasn’t bad. My only worry is whether the décolletage will be open.
If I wear a dress that hides the Royal Flower, Freed’s mood will turn sour. I know he’ll endure a day if I say the dress is from the Queen of Irvine, but I don’t want to aggravate him needlessly.
I returned to my room and had lunch with Freed, who similarly returned after finishing his business with Prince Hendrik.
About when I was ready to go out, the door to the room was knocked on.
Who came inside was Brother and… Cain.
Unlike when he’s in Wilhelm, Brother was properly wearing noble clothes. As expected, he wouldn’t dress slovenly in another country. But, why were they together?

“Cain? Why are you together with Older Brother?”

Standing next to Brother, Cain was making a disheartened expression. On the contrary, Brother had a beaming smile. Somehow, I understood the course of events from that alone, but when I looked at Cain for the explanation, he said with an incredibly bitter face.

This time I looked at Brother. He said with a grin.

“No, listen, Freed told me to accompany you on the walk today. I thought you’d bring Cain along anyway even if he was out of sight, so as a test I said we should go together.”
“Don’t make it a test…”

“Ain’t it fine? You’d come as Lidi’s escort anyway, right? It’s easier to be an open escort than to follow alone in secret.” 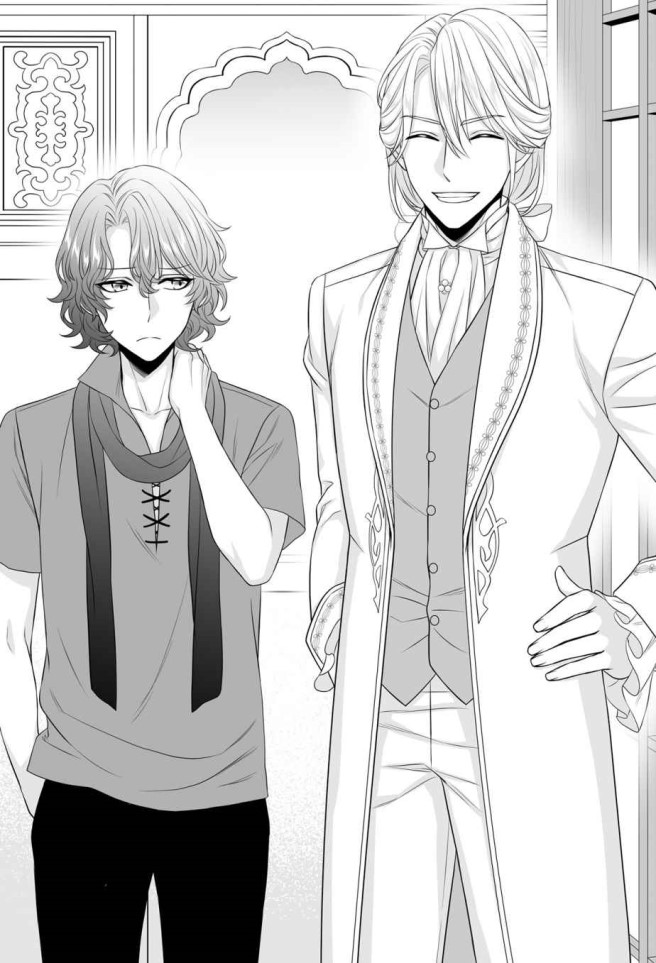 “I’m telling you I haven’t come here as a Wilhelm escort.”
“There’s no problem, right? All our escorts know you as Lidi’s escort. Aah, I can’t help thinking we should’ve done this earlier.”

Certainly, he might have a point.
Thanks to Ms. Delris’s medicine, Cain has been recently recognized by many people. I also introduced him to Glenn and Will lately, so the King and our father may be the only ones who don’t know him.
No, knowing Father, it’s possible he’s already obtained the information and is just pretending not to know.
Since Freed and Brother knew about him, we kept silent… Such an approach seemed the best.

I thought adding an unknown escort would trouble Irvine, but the answer I got was what I could expect of Freed.

“Lidi, we informed Hendrik in the morning about your escorts increasing by one. He knows I’m in love with you, so he accepted without a fuss.”
“I-I see…”
“That’s why, I thought of having both Cain and Alex escort you in the afternoon. Cain, you’ll also have easier time escorting openly than if you were hiding, right?”

When Freed turned the conversation to Cain, Cain nodded with a complicated face.

“I can follow inside shops, so honestly, I’ll be saved, but…. Haa. Really, no more. Princess, Crown Prince, you can talk to the King about me when you want. I’m so involved now that it’s become silly.”
“Can we?”
“No matter how much I think about it, I can’t come to an answer, and although Alex forced it, we became friends. I can’t say that I hate higher-ups when hanging out with the son of a ducal house. I think it’s a good opportunity.”
“I see…!”

I was happy about Cain’s words.
When we met at first, Cain said he hated royalty and nobility. That’s why out of respect for his will I kept him a secret from Father. But, he began revealing his existence little by little to our surroundings, and finally, he said even the King could know about him.
As someone who knew him at first, I can say it’s an incredible change, and I’m happy from the bottom of my heart that he could say that.

“Then, then! I’ll introduce you to Father once we’re back!”
“I don’t need something exaggerated like introductions. You can just tell him when you find it appropriate. Anyway. I and Alex will be the escorts in the afternoon, right? Alex is not fit for being an escort. Are us two really okay?”
“As long as you’re there, there’s nothing to worry about. I know that Alex lacks fighting potential, but he’s the easiest to put together with you, right?”

“That’s, well… true, but… Nn? This means, you invited Alex with the intention of dragging me out from the start?”
“While this may be a friendly country, it’s still a foreign one. Lidi’s safety is most important to me. For that reason, I thought it would be best if you guarded her not from hiding, but from up close. I have plans, so I can’t go. You’re the only person whose skills I can trust unconditionally. That’s why I did it.”

Clearly told that he was trusted, Cain blankly looked at Freed. His cheeks gradually flushed. Noticing that, Cain said to gloss over it.

“I-If you say it’s for Princess, there’s no way I’d refuse… While at it, I’ll also protect Alex with his lack of the fighting potential.”

Brother reacted sensitively to those words.

“Oi! You two! What’s with me lacking fighting potential!? Of course, I’m not as good as either of you who are called Flawless or Red Shinigami, but I can still handle myself!”

Nobles need some swordsmanship knowledge. Brother has received proper training since he was young, and I’ve heard his muscles aren’t bad either.
But it wouldn’t be enough for a military officer, and it makes no sense to compare him with Freed or Cain.

“Really, I only have people as strong as monsters around me… At such times, I wish someone as weak as Will was here.”
“Why Will?”

When I unintentionally butted in as the unexpected name came out, Brother said with an extremely serious face.

“He’s lankier than me, right? Looking at him would be a relief.”
“… I respect that you can say that despite knowing how skilled Will is at magical arts.”

As Brother insulted Will, Freed told him so with a serious face. Brother’s answer to that was harsh.

“Yeah, once he activates magical arts, it’s my loss. I know that. That’s why, I just need to suppress Will beforehand. So far, I’ve never lost a fight with Will. Ah, come to think of it, I’ve never lost to Glenn either.”
“… Stop bragging.”

I got a headache looking at my real brother laughing that he beat down the present commanders of the Magician Division and Royal Guard Order with his fists.
As I was letting out deep sighs, Cain moved next to me and said.

“Really, such times make me think that Alex really is Princess’s brother.”
“… Could you stop?”

I sincerely didn’t want to be lumped together with him.

View all posts by jingle

This site uses Akismet to reduce spam. Learn how your comment data is processed.